You’re reading novel Remarried Empress Chapter 424 online at BestLightNovel.com. Please use the follow button to get notification about the latest chapter next time when you visit BestLightNovel.com. Use F11 button to read novel in full-screen(PC only). Drop by anytime you want to read free – fast – latest novel. It’s great if you could leave a comment, share your opinion about the new chapters, new novel with others on the internet. We’ll do our best to bring you the finest, latest novel everyday. Enjoy

Is he out of his mind?

I didn’t understand his expression. I scowled at him, but Sovieshu’s stunned expression remained unchanged. He was so dazed that it seemed like the only way to snap him out of it was to clap in front of his face.

I couldn’t bear it, so I called out to him sharply.

Sovieshu finally raised his eyebrows and spoke as if he had just realized something. Then he narrowed his eyes and smiled.

“You have grown. You really, really have grown up wonderfully.”

Is he talking about me? His eyes were definitely on me, but how could he speak to me like that?

“Even your gaze has become more determined. Your beautiful eyes radiate confidence. You look wonderful.”

… Has he gone crazy? 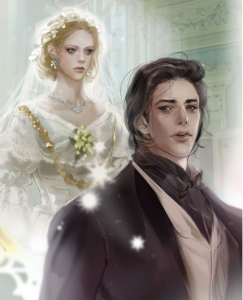 He was clearly speaking to me.

Heinley, who was across from Sovieshu, was staring at him with his mouth open. He looked as if he didn’t understand what was going on.

In fact, everyone else seemed just as confused. in the hall had similar expressions on their faces as they stared at Sovieshu.

Moments later, Heinley looked me up and down, surrept.i.tiously. He seemed to be checking if I had indeed grown taller.

Sovieshu and I had met recently, so to say that I have “grown” didn’t make sense. Could it be a joke?

But it doesn’t sound like he’s joking. Slowly, doubt crept up. Have I really grown?

In any case, it doesn’t matter. I mustn’t let his words affect me.

As soon as I spoke coldly, Sovieshu sat down and smiled at me.

The last time we met he was devastated. It was only a few weeks ago, but since then, did he attain enlightenment? Something like, ‘life is short and you only live once, so you should never lose hope…?’

I made sure to control my expression and I sat next to Heinley.

Sovieshu’s lips twisted for a moment when I sat down next to my husband, but he didn’t lose his smile.

McKenna interjected, but although the meeting resumed, the atmosphere remained uncomfortable.

What were the points under discussion? The mages’ loan had been agreed upon beforehand, so there should be no problems in that regard.

“The Eastern Empire will comply with the loan of the mages. But the mages must be paid for their work. Naturally it is up to the borrower to bear the payment. If you don’t want to pay, it would be very selfish of Your Majesty Heinley.”

Apparently, I was mistaken and there was indeed a problem with the loan. It seemed that Sovieshu wanted Heinley to pay.

“Don’t you consider the remuneration too high?”

“The Western Kingdom… oh, I’m sorry. I still can’t get used to it. Doesn’t the Western Empire, which boasts of its wealth, have the ability to pay for it?”

“Of course we can afford it. But I didn’t think the Eastern Empire was short of money… Ah, I had forgotten. You have no money to pay your men because the ousted Empress left an enormous debt, and her actions will continue to cost dearly in the future.”

“It’s fortunate that you know our situation well. In that case, I can raise the price a little more, since you understand our position.”

Why is his current logic… provocative?

He replies in such a way that it is impossible to argue properly against his irrational arguments. It is irritating.

This was not Sovieshu’s usual style.

Usually, Sovieshu spoke as little as possible in meetings and turned a deaf ear to the provocations of others. Only in his days as Crown Prince did he used to speak this way, to annoy the other party.

As I examined Sovieshu’s behavior with narrowed eyes, he turned his gaze to me.

At that moment, our eyes met before I could look away. With his eyes on me, Sovieshu changed his words without blinking.

“… But between our two countries, certain concessions can be made.”

It was evident that he had changed his mind because of me. The attention of those present was naturally drawn to me, perhaps due to the same thought.

Once the meeting was over, I deliberately wrapped my arms around Heinley’s waist and spoke lovingly.

“You felt sick to your stomach earlier. Are you better now?

Heinley quickly understood my intentions and he frowned a little and leaned his head on my shoulder.

“But in My Queen’s arms I will feel better soon.”

It seemed a little childish to act like two lovebirds in front of others. I know that, as an Empress, I should not behave this way in front of our subordinates, but I did it because of my ex-husband’s presence. To draw a line.

I swallowed my embarra.s.sment and tried to speak more fondly than usual as I caressed Heinley’s shoulders.

“If we return to our bedroom, I’ll rub your stomach so you’ll get better faster.”

“We can go now. I don’t have anything else to do.”

“Alright. We can also talk about painting.”

“Oh, come to think of it, there is a matter I must attend to urgently.”

Why did he stop playing along? When I dug my fingernails into his arm, Heinley amended his words meekly.

“Actually, it can wait…”

I grabbed his hand and walked in the direction of our bedroom. But just as we took the stairs, a soft voice stopped me from behind.

When I turned around, I noticed that he had come closer. He seemed even more mesmerized than before, his demeanor still unusual.

Once I calmly nodded to indicate that I had heard, Sovieshu casually proposed,

“There is a message I need to convey to the Empress of the Western Empire. Could I request a few minutes of your time, in private?”

You're Read Remarried Empress Chapter 424 online at BestLightNovel.com. You can use the follow function to bookmark your favorite novel ( Only for registered users ). If you find any errors ( can't read,broken links, can't load photos, etc.. ), Please let us know so we can fix it as soon as possible. And when you start a conversation or debate about a certain topic with other people, please do not offend them just because you don't like their opinions.

Loved By An Older Man

She Shocks The Whole World After Retirement

Leveling Up And Becoming Undefeatable

Infinite Mana In The Apocalypse

You're reading Remarried Empress. This manga has been translated by Updating. Author(s): 알파타르트. Already has 37 views.